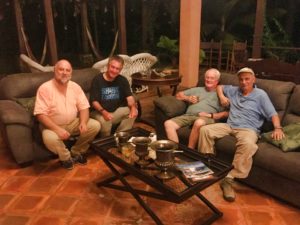 We recently had a famous guest stay with us at La Villa de Soledad. I am referring to Nigel Marven, the British adventurer who travels around the World seeking unique animals. It was Nigel´s first time in Honduras, and I can say that he had a great time. In total, he was in Honduras for three weeks and had a blast. One of his first stops was at the Cangrejal River Valley. There, he spent two nights with us at La Villa de Soledad, one of the top eco jungle lodges in Honduras.

Nigel had a chance to try white water rafting in the Cangrejal River. He even had a chance to spot and interact with a large snake that locals call “mica”. In English we call it the “Lighting Snake” because of its elegant bright yellow markings that resemble a lightning bolt! The snake is harmless and spends most of its time up in the trees. They can grow up to 6 or 7 feet long! 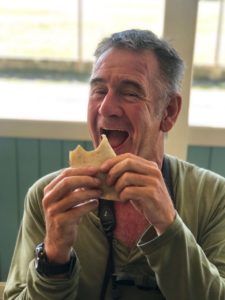 Perhaps Nigel’s most unique encounter in Honduras was with the typical Honduran “Baleada”. This is a large, thin wheat flour tortilla stuffed with beans. You see, it turns out that Nigel, being the animal lover that he is, is a vegetarian! Baleadas, are wheat tortillas with beans and can also have some cheese, cream and avocado. These last ones are some of my favorites! Nothing like enjoying a baleada after a long day at work!

We had a nice chance to chat with Nigel at La Villa de Soledad during one of the evenings that he spent there.  He was a friendly fellow that was impressed with the tropical jungles of Honduras. Nigel Marven also had an opportunity to visit the Lost City of the Monkey God in the Moskitia. He was personally invited by the president of Honduras, Juan Orlando Hernandez. Nigel Marvin spent also visited the Hog Cays, as well as the Bay Island of Utila. In Western Honduras he visited Gracias, as well as Copan Ruinas.

Nigel had some time to do some bird watching at La Villa de Soledad. Although he did see several different species of birds, he was particularly keen with some keel billed toucans whose nest was next door. They were bringing up a couple of chicks and there was quite a bit of activity at their nest.

It was an honor that Beaks and Peaks, the tour operator in charge of the tour chose us for their stay at the Cangrejal River Valley. Nigel even had some time to spend with us one evening. We invited our neighbors from the nearby hotels to stop by and meet him. We all had a pleasant time and are looking forward to Nigel’s program featuring his adventures in Honduras.