Guifiti has come from an ancestral alcoholic beverage meant to be both a spiritual and an earthly cure to many maladies to a tourist attraction!

Guifiti is a bitter alcoholic beverage, which consists of over 20 different herbs and roots, each meant to have a specific effect on your body or spirit. The idea is that it will cure many maladies and illnesses in a natural way. It is without doubt the result of a huge cumulative knowledge that has been passed on by generations of Garifuna people. But the knowledge actually goes further back, before the Garifuna existed.

Guifiti is the result of ancestral knowledge shared between two very different and distant cultures. On one side we have the African people that were captured off the coast of Western Africa and brought to America as slaves. The boat they were on was shipwrecked in a storm off the coast of the island of Saint Vincent in the Grenadines, and many of the slaves survived, suddenly recovering their freedom in a far away land that was inhabited by a completely different culture: the Carib Indians. They became instant allies, to survive the aggressive imperialistic expansion of the Brits. The result was a new ethnic mix, the Garifuna or Garinagu people.

The Garifunas flourished in Saint Vincent, and eventually became a nuisance to the Brits, who rounded them up and shipped them off to a remote unpopulated island in the Western Caribbean, known as Roatan.  This historical incident took place on the 12th of April, 1797. The Garifunas were literally marooned on the island of Roatan by the English. Originally, the Garifunas settled in what today is the community of Punta Gorda, located on the north side of Roatan, about halfway between the East End and the West End of the island.

The Spaniards, who controlled the mainland of Central America, saw this action as a British effort to colonize the Bay Islands, which were under dispute between both European nations. As a result, they rounded most of the Garifunas in Roatan and brought them to mainland Honduras, where the first group of Garifuna established in what today is Triunfo de La Cruz, just east of the City of Tela. From this point they eventually spread throughout the whole Caribbean Coast of Honduras and even beyond, with some villages established as far as Belize and Nicaragua. The bulk of the Garifuna people however, remain in Honduras.

The knowledge of these two different cultures, created the bitter mix that today is considered part of the Garifuna heritage: Guifiti.

Guifiti is the result of herbs and roots which are put into a bottle and mixed with an alcoholic beverage. Originally it was locally produced rum, but today it can be any rum, so you can actually have a very good guifiti, which would have been mixed with a good quality rum or a cheap guifiti with some moonshine rum mix, known locally as “guaro” or “Aguardiente” which would translate into something like “burning water”. The effects can actually be very different, as cheap moonshine rum will undoubtedly produce a horrific headache the day after… 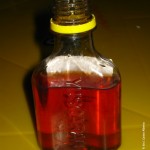 Today, more and more bars in Honduras, especially along the Caribbean Coast and the Bay Islands serve guifiti. Some of them even have what they call a guifiti challenge, which challenges you to have a certain number of guifiti shots in exchange for a “free t shirt” Evidently, the t shirt is not free, as you actually pay for a part of it with each guifiti shot you drink, however you will find that the hangover the next day comes at no extra charge!

For a genuine guifiti tasting experience, I recommend visiting a Garifuna community or an establishment owned and run by a native Garifuna.  In La Ceiba, probably the best spot for an authentic guifiti tasting experience would be at “caseta Gorcha Collins” located about a block away from the Hotel Quinta Real, on one of the side streets in the Zona Viva de La Ceiba. Here “Gorcha” a famous soccer player who retired many years ago, will sell you a shot of guifiti and walk you through the experience. 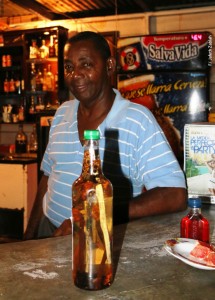 Of course if you have enough guifiti you will probably meet the old Garifuna Gods soon after, but beware because you can also meet the Garifuna Devils the morning after. Guifiti is considered by many to have aphrodisiac properties and is drunk by those looking to enhance their sexual performance. Whatever the case, when in Atlantida or the Bay Islands, you should definitely taste a shot of guifiti!

The Perfect Week in La Ceiba Canyoning and Rappelling in Honduras